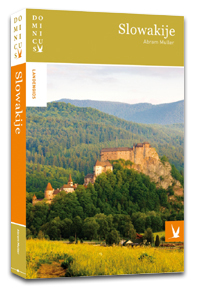 Slovakia is perhaps the most exotic country in Europe, one that people know little of and some have barely heard of. In the past 6 years of my 20 years in Slovakia, I have worked in tourism, organizing trips and stays in Slovakia for hundreds of people mostly from the Benelux countries and I have guided several thousands of them. The vast majority would never have visited Slovakia had it not been presented in combination with Hungary, Austria and the Czech Republic. Once in Slovakia, they are often surprised that it is a country with many similarities to its neighbours. Though exotic in its obscurity, Slovakia is recognizable to visitors as it has always been at the centre of European history. It is said that Europe ends where Gothic architecture ends; Kosice in the east of Slovakia is home
to the most striking Gothic cathedral in this part of the continent. Apart from this positive feeling of being at home in Europe, one is also struck by Slovakia’s beautiful countryside, its vast uninhabited areas of forest and mountains.

One would have thought that Slovakia should have no problem promoting itself abroad as a country to be visited: European, unspoiled, ancient, undiscovered. However, almost 20 years after it came into existence, Slovakia continues to trail far behind its neighbours in the number of visitors, moreover, the most recent years show a dramatic decline in tourism to Slovakia. What has gone wrong?
The first problem is that the country is poorly promoted abroad. Dutch and Belgian visitors are mostly interested in experiencing the ‘couleur locale’ of a country (familyrun guest houses, local restaurants, regional markets and products, etc) and are often keen bikers and hikers. Slovakia, in contrast, promotes its spas, skiing resorts and accommodation in luxurious castle hotels. Its presentations in recent years at the most popular holiday fairs in Brussels and Utrecht were a case in point: ‘Come and visit Slovakia, organizer of the world championship of ice-hockey’. This was a naive or, at best, a very illconsidered strategy to attract visitors, as few Dutch or Belgians know this sport even exists.

But the blame must be shared not only by Slovak institutions, but also by Slovaks working in the tourism sector. One only has to look at what is happening in the High Tatras. Instead of carefully reconstructing their heritage, for example, the beautiful Art Noveau hotels built at the beginning of the 20th century, devastated by a lack of maintenance for decades, new characterless concrete hotels are being built that will add nothing to the wonderful atmosphere of the high mountains. Smaller concrete hotels and guest houses without style have sprung up all over the country. They are all similar in their lack of atmosphere, as they are mostly built as part of an investment plan and seldom due to a real interest in customers: tasteless decorations, plastic flowers, loud radio music, the same food everywhere, a lack of information about the region, poor language skills.

One needs to go deeper into the subject to explain why many Slovaks are not promoting Slovakia with a real love and respect for their country. History has been very tough on the Slovaks and having been suppressed for so many centuries, it is not easy to redefine an identity and rebuild self-confidence. Luckily, there are also more and more projects being patiently developed by local people who do not wish to show off or pretend to be something they are not. Rather, they look to be their true selves, by being as hospitable as they are in private. These projects include family guest houses, camping sites, agro-farms, renovations of historical sites, and small handicraft ateliers.

It is these people that will attract a steady number of visitors who will find a reason to return, as it is these people that are showing the true character of the country – the ‘couleur Focus On locale’, which most people like to visit France, Italy, and Spain for, as well as neighbouring countries. It is to these people I dedicate my book and to whom I will promote Slovakia as best as I can.

Slowakije, Abram Muller, Dominicus landengidsen, Gottmer Uitgevers Groep,
Haarlem 2012. The book may be orderedoutside Belgium and the Netherlands at www.bol.com